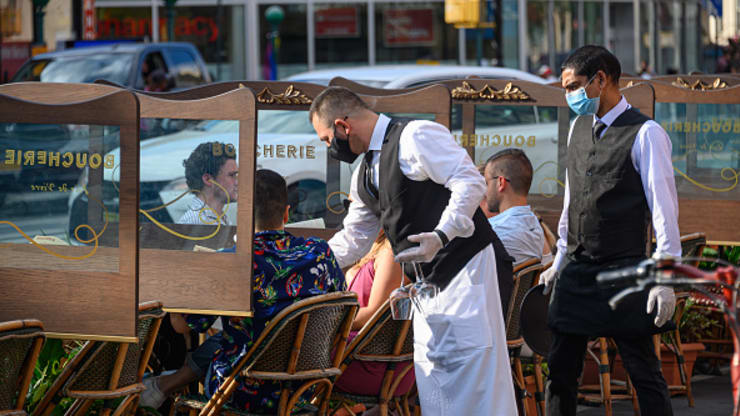 The U.S. economy added back millions of jobs in June thanks to rehiring in hard-hit industries like leisure and hospitality.

But for some sectors, the road to pre-coronavirus employment recovery may take years — or worse, never occur. Some now say that the coronavirus and efforts to contain its spread could act as a catalyst for layoffs that may not be fully recouped.

CNBC studied both the short-term and long-term employment changes in a variety of the economy’s sub-industries to isolate the recent impact of Covid-19 from more-enduring trends.

One industry that could have a particularly hard time bouncing back is apparel retail. Economists have for years documented a marked decline in U.S. brick-and-mortar retail jobs at the hands of online shopping.

And now, despite a sizable rebound of 202,000 clothing retail jobs in June, it remains to be seen whether the broader retail sector will be able to make a complete recovery in employment figures.

The most recent data studied by CNBC came in the Labor Department’s monthly jobs report, which showed U.S. employers added some 4.8 million back to payrolls in June and pushed the unemployment rate down to 11.1%.

But both stocks and bond yields moved off their session highs within a couple of hours of the report as economists and investors alike began to doubt the longevity of the headline jobs strength and uneven rehiring.

Stevenson, who also served on former President Barack Obama’s Council of Economic Advisers, wrote on Twitter that June’s bounce in clothing store employment won’t do much to stanch the long-term decline in apparel retail jobs.

“Employment in clothing stores is up 202K! But it’s still down 40% compared to last year,” she wrote. “Many of those jobs are never coming back.”

Another industry that may have a more difficult time returning to prior employment levels is mining, and specifically coal mining.

But between January and June, the coal industry has lost another 14% of workers. Halfway through last month, the sub-industry had just under 44,000 workers.

Other industries, though hard hit amid Covid-19 lockdowns, are showing signs of a more robust employment rebound.

Leisure and hospitality, which includes restaurants and bars, perhaps bore the worst of the coronavirus layoffs amid an eye-popping contraction in travel and dining out. In early May, the Labor Department reported that the leisure and hospitality industry had lost 47% of its entire workforce during the month of April alone.

But many of those workers were likely placed on temporary leave, or furloughed, and appear to be returning to work at a faster rate than those in other industries.

Bars and restaurants employed 12.3 million Americans in February 2020, only to see that figure collapse to 6.2 million in April. It’s since rebounded 47% off that low and for June rose to 9.2 million jobs.

Another industry that has shown resiliency in recent months — and strength in recent years — is couriers and messengers. This sub-industry includes the U.S. employees who deliver parcels and mail both across states and on a local basis.

In fact, demand for e-commerce amid the coronavirus has corresponded to a net increase in the number of people working in the industry. The courier and messenger industry employed 859,000 people in January, 861,000 people in April and 904,000 in June, according to the Labor Department.