A Tesla Model 3 Tear-Down After a Hardware Retrofit

Tesla Model 3 is a three-year old model. And yet, with software updates and a hardware swap (from HW 2.5 to HW3.0), Tesla is promising to keep Tesla 3 relevant and get it ready for full self-driving future.

At least, that’s their promise.

A mildly cultish cadre of tech-savvy consumers in Silicon Valley are hooked on Tesla and can’t get enough. They love the car, they like its electric propulsion and they follow Elon Musk’s tweets religiously.

Above all, they admire Tesla’s clean, elegant vehicle architecture, designed from the ground up. Tesla can add new features and even upgrade vehicle performance almost magically, by over-the-air (OTA) software updates. None of the other car OEMs — their vehicles tied to legacy platforms — have engineered so sweeping a method of software-based vehicle update.

Tesla fans tend to worry less about Tesla’s controversial “Autopilot” feature. Their focus neither on what it does nor what it doesn’t. They prefer to concentrate on what Autopilot can become, someday, as promised by Tesla. In addition to a series of software updates, Tesla has upped the ante by rolling out a hardware swap — from Tesla’s HW2.5 to HW3.0 — last year.

What intrigued us is this Tesla-touted transition to HW3.0. What’s under the hood of a Model 3 today, and how will it transform?

Model 3 is a smaller and more affordable EV, first produced in mid-2017. Thanks to the introduction of its home-grown SoC last year, Tesla is promising Model 3 buyers that if they purchase the Full Self-Driving (FSD) software bundle, they’ll get a HW 2.5 to HW 3.0 retrofit with a simple service center appointment.

Just to be clear, though, the FSD package today does not yet make a Tesla capable of driving without human intervention. Right now, it’s a series of incremental Autopilot upgrades. Further, the current $7,000 FSD package is scheduled to go up by about $1,000 on July 1st, according to Musk’s tweeted announcement last month.

In this latest “Under the hood” series with System Plus Consulting (Nantes, France), we take a deeper look inside Tesla Model 3, with focus on the automotive sensors and Autopilot ECU Tesla deployed inside Model 3. 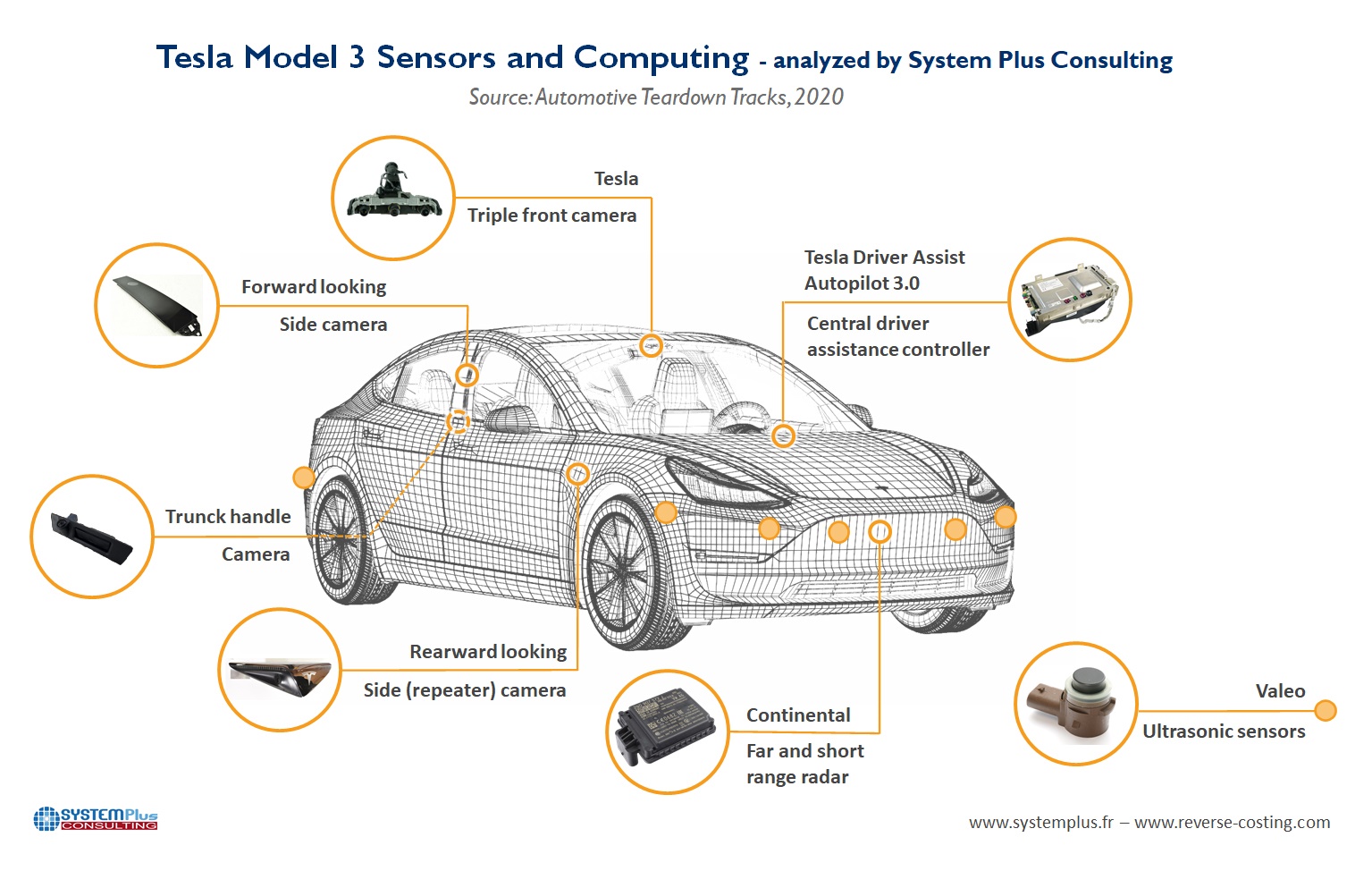 The computing power inside cars is an increasingly important feature. A significant amount of computing power is necessary to enable optimal driver assistance and automated driving and activate safety features.

To optimize automated driving, many car OEMs and Tier Ones are adopting a variety of sensors such as cameras, radar, lidar, and ultrasonic sensors, so that vehicles can detect in the surroundings they are in. All the data derived from the sensors must be grouped together, and this is where the control unit comes into play.

Given the “cutting-edge” image maintained by Tesla, the general public is forgiven if they believe all the hardware pieces inside Model 3 are technically the most advanced available on the market.

A peek under the hood, though, reveals that Tesla’s primary design goal for Model 3 was to reduce the cost of ADAS, making the model “affordable,” explained System Plus CEO Romain Fraux.

For automotive sensors in Model 3, Tesla is using eight cameras, one radar and 12 ultrasonic sensors. Model 3 uses no lidars, true to Musk’s famous claim that lidar is “a fool’s errand.”

In the following pages, System Plus shares highlights of sensors and computing unit of Model 3 under the hood.