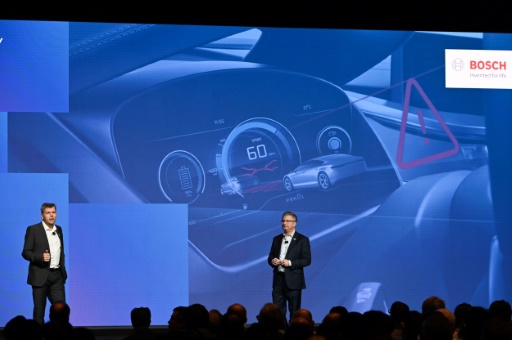 Fully autonomous cars are on a slow path to mass deployment, but a range of other vehicle technology is speeding ahead.

Here are some of the innovations causing buzz at the 2020 Consumer Electronics Show in Las Vegas this week.

While electric cars have been around for years, some analysts say growth appears to be accelerating.

“We all know about electric vehicles, but we’re finally at that inflection point where electrification makes a lot of sense,” said Steve Koenig, head of market research for the Consumer Technology Association, which organizes the annual show.

Among the new electric models unveiled at CES were some aimed directly at the high end now occupied by Tesla.

The Fisker Ocean, starting at $37,499 and planned for mid-2022 deliveries, offers a “California Mode” in which nine glass panels can be moved to create an open-vehicle feel while maintaining roll stability.

Fisker announced it was partnering with Electrify America, which plans to have some 800 charging stations and about 3,500 chargers across 45 US states by 2021 which will automatically recognize the Fisker cars.

Chinese startup Byton said it plans to launch a $45,000 luxury M-Byte electric SUV in China this year and in the United States in 2021.

Fiat Chrysler Automobiles meanwhile said its Jeep brand would offer plug-in electric options on all its models by 2022.

Sensors, inside and out

As cars move toward autonomy, sensors and related technology will need to be more precise, including various deployments of lidar, radar and infrared cameras, although tech firms are debating which is best.

“There’s no single golden egg technology that does everything, each has a tradeoff,” said Bobby Hambrick of the Swedish-based technology group Hexagon, which had its own autonomous prototype at CES.

“You have to have some combination of different sets or modalities. And you have to understand very clearly when those systems fail, that there’s a backup system.”

Sensors inside the vehicles will keep an eye on drivers and passengers for safety.

Among those on display, the Karma concept vehicle includes a driver-monitoring system with facial recognition to unlock the car and a drowsiness detector.

New kinds of windshield displays and other technology are bringing augmented and mixed reality into cars.

China-based Futurus Technology showcased its mixed reality windshield which shows information about what’s ahead, including potential road hazards up to 165 feet (50 meters) away.

“It will increase driver safety and help you make a decision,” said engineer Huijun Wu.

German equipment maker Bosch showed its smart glasses which can be worn by drivers to get similar alerts to those received on a smart watch without looking away.

Bosch spokesman Peter Weigand said that with this system, the image is projected directly onto a driver’s retina to be in the center of the field of vision without any distracting reflections.

“It’s fully transparent when it is off,” he said.

Some of the technology seen at CES will enable cars to know who is inside and will adapt to drivers and occupants with the correct seating posture, temperature, music and more.

“You can create a profile and send it to the cloud and it will recognize the driver,” said Dean Phillips of Amazon’s AWS Auto, a new unit which leverages the online giant’s cloud computing power, and is working with tech partners including BlackBerry’s QNX auto unit.

Byton said its vehicles would include apps with partners CBS/Viacom for in-car movies and entertainment plus AccuWeather for hyperlocal forecasting.

Byton CEO Daniel Kirchert said this will mean a “unique user experience” and bring about “in-car interactions in a way that is more engaging than ever before.”

Better communications including voice controls and 5G will be critical for vehicles in the coming years with connectivity a big element of car technology.

Another is “vehicle-to-everything” capabilities or V2X which enables cars to communicate with traffic and the surrounding environment.

“I think V2X will be a big deal because it enables cars to know what they can’t see, what is around the corner,” said analyst Jack Gold of J. Gold Associates.

Samsung at CES showed how its telematics control unit could connect via 5G to provide superfast information to drivers.

“The year 2020 will see the advent of more cooperative forms of mobility, with 107 million connected cars on the road starting to share data messages about road and traffic conditions to allow other connected vehicles to anticipate hazards and improve traffic flow,” said Maite Bezerra of ABI Research.