Warren Buffett’s conglomerate, Berkshire Hathaway, has acquired slightly more than 5% of the outstanding shares in five of the leading Japanese trading companies. The companies are Itochu, Marubeni, Mitsubishi, Mitsui and Sumitomo, and the stakes were bought by insurance subsidiary National Indemnity Company over a year through regular purchases on the Tokyo Stock Exchange. The announcement was made in a press release a day after the famed investor celebrated his 90th birthday.

“I am delighted to have Berkshire Hathaway participate in the future of Japan and the five companies we have chosen for investment,” said the Oracle of Omaha. “The five major trading companies have many joint ventures throughout the world and are likely to have more of these partnerships. I hope that in the future there may be opportunities of mutual benefit.”

Berkshire Hathaway intends to hold its Japanese investments for the long term, and, depending on price, may increase its holdings up to a maximum of 9.9% in any of the firms. Together the stakes are valued at over $6 billion today. Buffett has promised that no purchases beyond that cap will be made unless the board of directors gives specific approval. 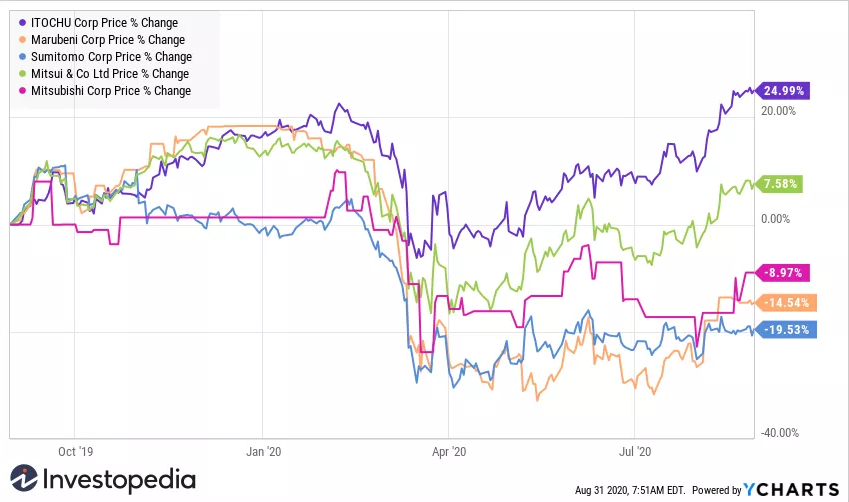 In Japan, very large, general trading companies are known as “sogo shoshas,” and Buffett has bet on the five biggest of the seven currently in existence. “These trading companies generate strong cash flow, they pay out a lot of dividends and they have businesses that can’t be easily replicated,” said Thanh Ha Pham, an analyst at Jefferies, to Bloomberg. The concept of extremely diversified, enormous conglomerates with broad global reaches and tens of thousands of products and services handled, developed in Japan in the 19th century to conduct the import of raw materials to the country that has little in terms of natural resources. It was revived after the Second World War, and such companies played a big role in its rise as an economic superpower.

Their dominance has dropped since the 1980s but remains significant. Today the seven sogo shoshas have over 5,000 subsidiary and affiliate companies and maintain offices in 210 cities overseas, according to the Japan Foreign Trade Council. In fiscal 2016, their sales were about 15% of Japan’s GDP, and in fiscal 2015 they accounted for around one-third of Japan’s imports and about 18% of its exports, according to a report from Marubeni.