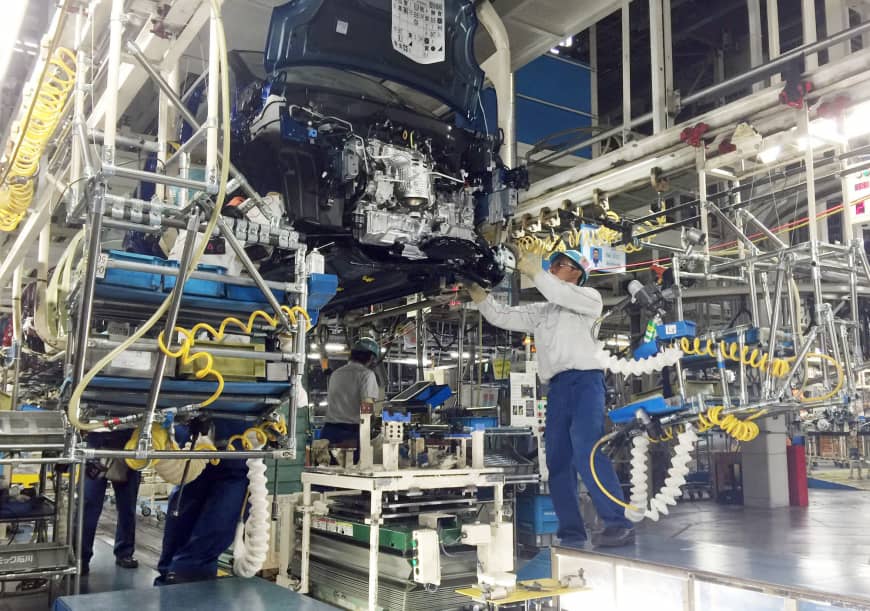 Electric vehicles may be the future for the auto industry. And if they are, that may spell the end of many traditional auto jobs.

The problem for the workers is clear: The electric motors that will power those new vehicles have far fewer moving parts than traditional internal combustion engines and the transmissions that go with them.

“The internal combustion engine and transmission are vital parts of automotive manufacturing,” said Brett Smith, director of research at the Center for Automotive Research, a Michigan think tank. “They are ones that are clearly at risk right now. That has everyone concerned.”

The traditional gasoline engine has carefully engineered pistons and fuel-injection systems that differentiate one vehicle’s performance from another. It also also needs a complex transmission to transfer power to the wheels with a series of gears.

An electric motor needs none of that, and works with a fixed, single-gear gearbox that powers the wheels.

Engines power a lot of jobs

So far, the traditional automakers are making so few electric vehicles that there has been little impact on jobs. While GM closed three plants this year, those cost cuts were designed to free up money for research and development on new cars. Mercedes Benz announced plans to cut 10,000 jobs for the same reason last week. And Volkswagen’s Audi announced plans to eliminate 7,500 jobs related to electric vehicles last week as well, which will be phased in over the next six years.

The US Labor Department estimates that there were about 150,000 US jobs just building engines, transmissions and axles at US factories last year. That compares to 235,000 jobs at auto assembly plants, where those engines and transmissions and other parts — from body panels and gas tanks to seats and steering wheels — are brought together to build a car or truck.
There are also numerous other parts on a traditional car that aren’t needed in an electric vehicle, including a radiator and exhaust system. That would probably eliminate some jobs, too.

The unions representing autoworkers are hyper aware of the risk posed by electric vehicles.

IG Metall, the German union for most of that nation’s autoworkers, estimates that 75,000 German jobs building engines and transmissions will be eliminated by 2030. It is calling on the companies and government to help manage the job losses through retirements and retraining.

“The challenge is great, but it has to be overcome if the right conditions are created now,” said Jörg Hofmann, first chairman of the union. “Above all, companies must ensure that employees do not get knocked over by this change.”

Statements from both IG Metall and the United Auto Workers union concede there is little point in trying to stop the growth in electric vehicles.
“There is industry consensus that EVs will increase their market share, it is just a matter of how quickly this will happen,” said a white paper prepared by the UAW. The union thinks it can fight any move to transfer work building electric cars to low-cost, low wage suppliers.

In their most recent contracts with GM and Ford, the UAW got an agreement to keep the automakers from outsourcing work on electric and autonomous driving cars. But those pacts run only for the next four years. Electric vehicles will still probably be a small share of both company’s production during that time, so it was relatively easy to for the companies to agree to keep the work in-house during the life of the contract.

The bigger question is what happens with future contracts when EVs are expected to be a major share of automakers’ production.

The automakers have an incentive to build internal-combustion engines, fuel systems and transmissions at their own factories. The quality of those parts help determine how well a car performs, which helps companies sell cars. And if there were problems needing repair, the warranty costs would fall on the automaker.

That’s why, as they shift production to EVs, there will be a greater incentive for US automakers to outsource electric motors, batteries and other parts to contractors paying lower wages.

“Building engines and powertrains has been a core part of these companies for more than 100 years. It’s something they do better than anyone else,” said Smith. “Does it make sense for GM to build their own electric motors? Not as much sense as it did to make their own internal combustion engines.”