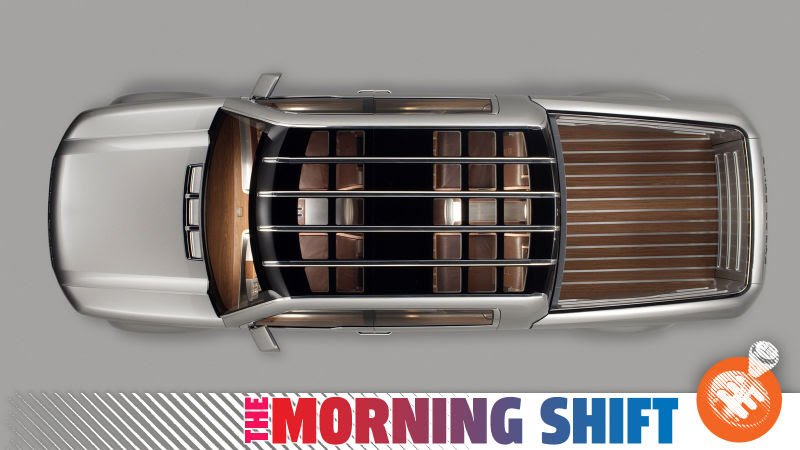 The 2006 Ford Super Chief concept wasn’t electric, but it could run on hydrogen, which is close.
Photo: Ford

An all-electric Ford F-150 is on its way and I get the feeling that Ford thinks its customer base fears change. This is probably wise.

Ford dumped a lot of news about the F-150 EV today. The company said it’s building a $700 million facility to build it, as the Freep reports:

Ford Motor Company revealed Thursday an audacious plan to build a $700 million plant at the Rouge complex that would create the first all-electric F-150, the nation’s best-selling vehicle.

While Ford had mentioned a significant planned investment in southeast Michigan previously, this is the first time the company has confirmed its location and announced a new plant.

The main news to me is the PR attack for this vehicle. Ford seems to be going for questions of practicality over style, interest, or design. Automotive News has a big explanation:

While the company wouldn’t provide specific figures, Kumar Galhotra, Ford’s president of the Americas and International Markets Group, said the lifetime cost of ownership of the electric F-150 will be roughly half that of the current-generation vehicle. The lower estimate is based off zero gas and oil usage, low electric charging rates, lower maintenance costs and increased vehicle uptime, Ford said.

The new details are part of Ford’s effort to position the F-150 EV as a purpose-built work vehicle that can provide numerous benefits to fleet operators as well as traditional retail customers. The automaker has long been the leader in the lucrative full-size pickup market but will face increased competition from EV makers Tesla, Rivian, Nikola and others in the coming years.“While other electric pickups are competing for lifestyle customers, the all-electric F-150 was designed and engineered for hardworking customers that need a truck to do a job,” Galhotra told reporters ahead of an event announcing a standalone assembly facility for the vehicle.

If you’re pressing this hard on practicality, either you know the design is so interesting that you don’t need to sell it at all, or it’s so dull and boring that you need to pitch on any other angle to help it along.

NHTSA safety rules have been delayed and your representatives want to know why, as Reuters reports:

The delayed rules include rear belt warnings, revisions to vehicle defect reporting requirements, child restraint side impact tests, requirements for automakers to e-mail recall notices and provisions that make it easier to install child safety seats. Many of the rules have been delayed by more than four years.

U.S. Rep. Frank Pallone, who chairs the Energy and Commerce Committee, along with U.S. Reps. Jan Schakowsky and Lisa Blunt Rochester, asked the Government Accountability Office to study the NHTSA research and rulemaking process “to identify factors contributing to delays.”

Under President Donald Trump, NHTSA has never had a Senate-confirmed administrator — the first time in history the agency has gone so long without a permanent head. It has been more than a year since the White House had a nominee pending.

In 2012 and 2015, Congress directed NHTSA to implement numerous safety mandates but lawmakers said “NHTSA has failed to implement nearly 20 congressionally mandated rulemakings, reports, and research initiatives by their statutory deadlines.”

I would think that part about Trump leaving NHTSA headless would have something to do with this but I’m not a political analyst.

The switchover to EVs ain’t cheap, and that’s true for car dealers as much as it is for car companies. It’s more than some will want to take on, as Automotive News explains:

Cadillac on Wednesday told its 880 U.S. dealers that they will need to invest at least $200,000 each on electric vehicle chargers, tooling and training to continue selling the brand’s vehicles beyond 2022.

“Our dealer council did say there may be a few dealers that don’t necessarily share the Cadillac vision,” [Rory Harvey, vice president of Cadillac sales] said. “We believe that most dealers will.”

Charging stations are among the biggest portions of the $200,000, which Harvey called the “entry ticket cost” for dealers as Cadillac’s EVs begin to arrive. High-volume retailers might need to spend more than that, he said, and expenses could increase as the brand introduces more EVs, necessitating more chargers and tooling.

The business model of Tesla is, in large part, getting Elon Musk on stage to overpromise some wild tech that is still yet to come so that investors dump money into Tesla the company. Actual car production is related, but not directly.

What’s fun to see is when other companies try this same strategy. What they are missing is the power of celebrity, so everyone calls bullshit on it. This seems to be the case with Nikola at the moment, as dug into in an excellent deep-dive by the Financial Times. Here’s the opener:

As strobe lighting lit up a former railway shed on the outskirts of Turin, Trevor Milton took to the stage. It was December 2019 and the founder of fledgling truckmaker Nikola was enjoying the proudest moment of his life, unveiling an investment by Italy’s CNH Industrial.

Dwarfed by the electric Nikola TRE truck, he described how “we now have production lines ready to go”.

There was only one problem: it was not true. Close to a year later, the assembly line at Iveco’s plant in the German city of Ulm is still not complete and the prototypes are being built by hand. Finished Nikola trucks will not be made until the final months of 2021.

Just how many of Mr Milton’s claims are false has become the talk of investors worldwide after a short-seller’s report alleged Nikola was an “intricate fraud”.

Now the US Securities and Exchange Commission and the Department of Justice are looking into the company, a stock market sensation that this summer surpassed Ford in value without having sold a single vehicle.

LG Chem is spinning off its electric car battery business, which I hadn’t realized was the largest in the world. Take that, Panasonic. Per Reuters:

South Korea’s LG Chem, a supplier for Tesla Inc. and General Motors, said Thursday it plans to separate its battery business into a new company as the electric vehicle market takes off.

The move came after LG Chem swung to a profit in its EV battery business in the latest quarter. It expects further profitability thanks to growing demand from European automakers and more sales of cylindrical batteries used in Tesla cars.

I’m expecting Ford to make the EV F-150 as dull as possible and it will be a bust. Pickup truck buyers are conservative, but they are also showy in a way. They don’t want to go through all that hassle and not have the neighbors know they went all-electric.