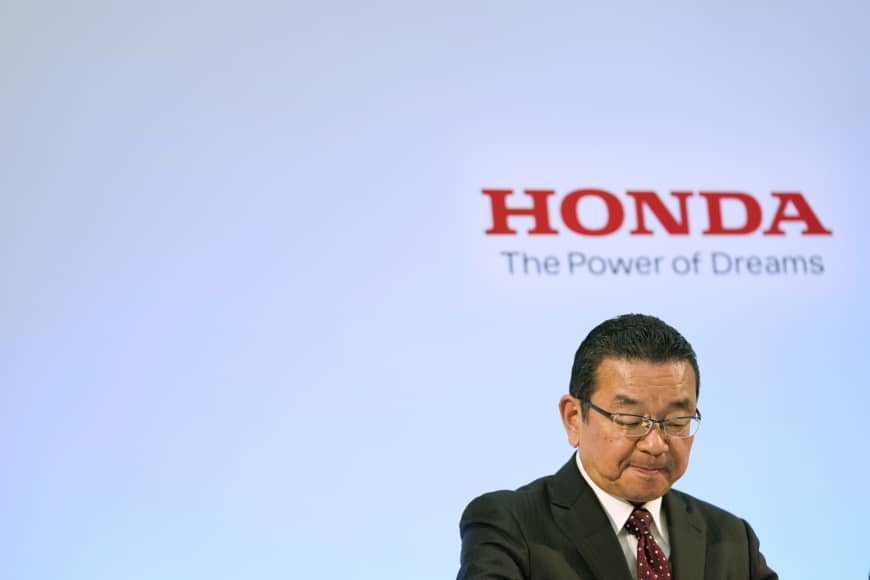 Takahiro Hachigo, president and chief executive officer of Honda Motor Co., attends a news conference in Tokyo on Wednesday. Honda’s annual operating profit fell short of the automaker’s own forecast, dragged down by a loss in the fourth quarter.

Honda reported a loss for January-March Wednesday, despite growing sales, as an unfavorable exchange rate, income tax expenses and other costs hurt results.

Honda Motor Co. reported a ¥13 billion ($118 million) loss for the fiscal fourth quarter, a reversal from a ¥107.7 billion profit the previous fiscal year.

For the fiscal year through March, Honda recorded a ¥610.3 billion ($5.5 billion) profit, down 42 percent on year because of an absence of a U.S. tax break, which boosted earnings the previous year.

Inter-regional cooperation will reduce manpower needs by a third, which will instead be used for research and development, he said.

In North America, a critical market for the Japanese automakers, Honda will reduce model options to realize growth, he added.