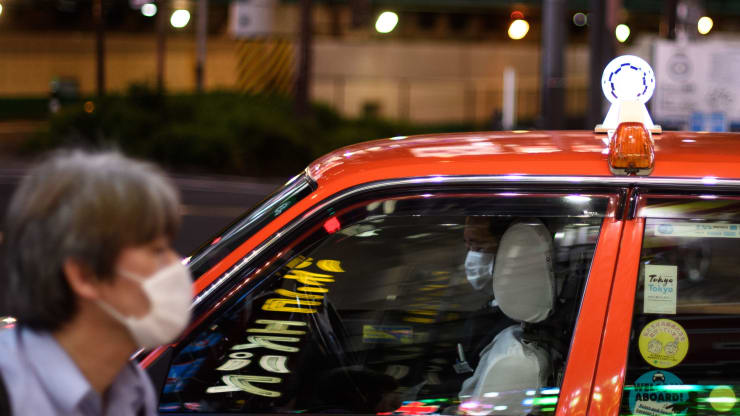 A man wearing a facemask walks past a taxi along a street in Shinjuku district of Tokyo on June 24, 2020.
PHILIP FONG | AFP via Getty Images

As poverty rises in Japan, the country’s middle class is slowly eroding away, according to a recent report by Oxford Economics’ Shigeto Nagai.

“After the bubble burst in the 1990s, income has declined across the income percentiles, and the share of low-income households has risen as those of middle- and high-income groups shrink,” Nagai, who is head of Japan economics at the firm, wrote in the report.

The ten years starting from the early 1990s have often been referred to as Japan’s “Lost Decade.” The period was marked by economic stagnation and deflation following a boom in the prior years.

“Although it’s true that inequality hasn’t widened and income isn’t concentrated in the top tiers, the share of low-income households has been rising at the expense of middle-income groups in a process of secular income decline across percentiles,” the economist said.

Japan’s poverty rate stands at 15.7%, according to the latest figures from the Organization for Economic Co-operation and Development. That metric refers to people whose household income is less than half of the median of the entire population.

“The middle class is disappearing in Japan, albeit gradually,” Nagai warned.

A “major driving force” determining the income distribution has been its “life-time employment system,” Nagai told CNBC. It has been around for decades and was established during the country’s high growth period in the 1950s and 60s, he said, when there was a “very serious shortage of labor.”

The system is mainly practiced by relatively established companies and has three pillars, according to the economist:

In this relatively stable but rigid employment system, wages rise only gradually. Companies also place heavier emphasis on job security rather than compensating for short-term improvement in company performance or productivity, Nagai said.

The economist told CNBC that wage increments are decided by an annual spring negotiation known as Shunto, where the wages of unionized workers are decided by labor unions and management. What distinguishes this process from elsewhere is that the base-pay increase usually spreads across the entire seniority-based wage scale.

As a result, Nagai said, the system does not create a “top 1% earner” unlike Western compensation systems where top executives typically earn much more than other employees. In fact, the economist said that executive pay is “negligible” compared with places such as the U.S. He said, however, the elite in Japan have been “satisfied” with this flatter salary scale.

For years, Japanese companies have also been converting regular workers — who could previously enjoy the comparatively privileged lifetime-employment system — to part-time workers.

This shift, according to Nagai, started in the early 2000s as companies attempted to “survive” the competition with rising emerging-market economies such as China, where labor costs are lower.

More recently, the increase in part-time workers may also be coming from greater labor-market participation among two demographics, Nagai suggested: women who need work, but may not be able to commit full-time due to childcare duties and seniors who are no longer able to enjoy retirement as their pension benefits are not large enough.

According to data from Japan’s statistics bureau, the number of non-regular employees rose 2.1% annually in 2019. That was far faster than 0.5% growth in regular employees.

“Although hourly wages have been rising faster for non-regular workers amid a shortage of
labour, they’re still paid much less compared to regular workers,” Nagai said. “In addition, the entry of women and the elderly into the labour market as part-timers has depressed hours per worker for several years.”

“The share of low-income households will keep rising as more part-timers work fewer hours,” he said.

Meanwhile, lower inflation expectations have “really stabilized” in the country, Nagai said, arguing this has also contributed to the stagnation of wage increases. For years, the Bank of Japan has struggled to meet its ever-elusive 2% inflation target despite taking drastic measures such as bringing interest rates into negative territory.

The main beneficiaries of low interest-rate policies and aggressive quantitative easing are usually those who own real estate or stocks, Nagai said. The impact has been “relatively limited” due to the risk-averse nature of Japanese households, which generally do not invest in stocks and corporate bonds.

He said this could be another reason why monetary policy has had limited impact on income distribution.

The economist said he was concerned that the disappearance of Japan’s middle class could lead to further stagnation in consumption.

Consumer spending slumped after a sales tax hike in October. It fell even further this year as lockdown measures intended to contain the coronavirus pandemic froze economies. Recent data from Japan’s Ministry of Economy, Trade and Industry showed May retail sales dropped 12.3% from last year.

Nagai said the “jury is still out” over the government’s consumption tax hike due to the unexpected impact of Covid-19. While the move had “certain justifications,” the economist acknowledged lower income groups are more sensitive to tax hikes.

A more dynamic human resource allocation could help lead Japan out of this situation, Nagai said.

The lifetime employment system has led to many people being underemployed, he said. At the same time, numerous young people are left “reluctantly” living with relatively low pay, despite higher contribution and productivity.

The “static” allocation of human resources has hampered efforts to get rid of the “deflationary equilibrium” in Japan, he said. While more graduates are now choosing start-ups instead of established companies, Nagai said it is still “not a major trend yet.”

Prime Minister Shinzo Abe’s government has tried to combat many of these issues, attempting to make the labor market more performance-based, Nagai said. But corporations and their management have been reluctant to change, impeding government efforts, he said.

“Reform of the established employment system will be a protracted process because it has for decades served as an integral part of the economy and society,” Nagai said. “Transforming the system will require concurrent reform of social insurance and tax systems.”

Under the Abe administration, the Ministry of Economy, Trade and Industry has also worked to promote “economic metabolism” whereby losers exit and upstarts can bring “new energy,” the economist said.

While authorities have made a good effort, he said it is difficult for change to happen in such a short period of time.

For example, Nagai said Japan lacks Chapter 11-like bankruptcy procedures to give those who fail “another try.” He cited this as another example of limited flexibility in the Japanese economy, leaving people “very afraid” to make changes.

Still, Nagai pointed out that “lots of changes” are already underway in Japan, as the labor shortage has pushed companies to raise salaries to attract younger people. At the same time, there have been more start-ups and Chinese companies which “pay a lot” for young talent.

The number of people quitting their jobs early in their career to seek opportunities elsewhere is also “becoming more than negligible,” he said.

Such moves, in his opinion, would free up the labor market to enable more dynamic resource allocation while also contributing to wage inflation.