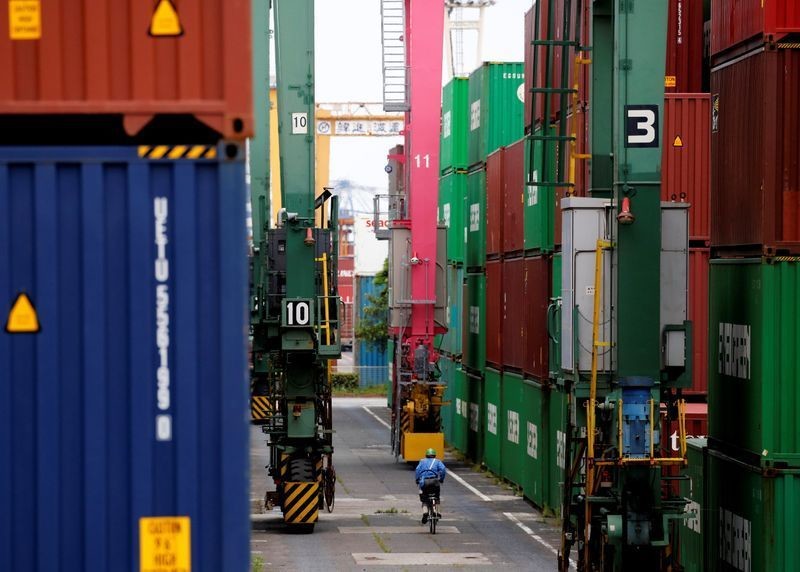 A worker rides a bicycle past containers at an industrial port in Tokyo. Photo: REUTERS file

Japan’s exports in October bounced back to just below the levels seen before the novel coronavirus pandemic, as global demand for products such as cars has risen in line with a gradual recovery in business activities, government data showed Wednesday.

Exports edged down 0.2 percent from a year earlier to 6.57 trillion yen ($63 billion), with auto shipments to the United States and China showing a significant increase while those of diesel oil and cargo ships remained sluggish, the Finance Ministry said in a preliminary report.

The declining pace of exports slowed from 4.9 percent in September.

Meanwhile, exports shrank for the 23rd consecutive month since December 2018, tying the longest streak of monthly on-year falls set in July 1987 when the country was facing fierce trade friction with the United States amid Japan’s rise as an economic power.

Imports decreased 13.3 percent to 5.69 trillion yen, down for the 18th straight month, mainly on the falling price of crude oil purchased from the United Arab Emirates and other countries. But the decline was smaller than the 17.4 percent drop in the previous month.

The goods trade surplus stood at 872.90 billion yen in the reporting month, securing black ink for the fourth month in a row, and up from the 687.84 billion yen recorded in September.

By product, exports of cars grew 3.0 percent, turning positive from a 0.5 percent decrease in September to post their first rise since July 2019. Those of auto parts also climbed 4.0 percent, following a 7.7 percent fall the previous month.

Increased exports to these countries, which are Japan’s two largest trading partners, could not make up for sharp drops in shipments to other areas, causing overall exports to decline, a ministry official said. Exports to the Middle East tumbled 30.3 percent and those to South and Central America sagged 26.2 percent.

Japan’s exports posted a double-digit fall between March and August due to the pandemic, and concerns are growing that recent virus resurgences in Europe and the United States could deal a fresh blow.

“The latest outcome shows that Japan’s exports are picking up vigorously, reflecting that the global economy is moving toward its normal state faster than expected,” said Takeshi Okuwaki, an economist at the Dai-ichi Life Research Institute.

Okuwaki said the virus resurgence in Europe “won’t inflict great damage” on Japan’s trade, given that the country’s exports to the area account for only about 10 percent of the total.

However, he said large-scale economic restrictions in the United States could have a serious impact.

Exports played a key role in boosting the world’s third-largest economy to grow an annualized real 21.4 percent in the July-September period from the previous quarter, the biggest expansion in 40 years, after it shrank 28.8 percent in the April-June term due to the government’s state of emergency declaration over the virus in April.

All figures were compiled on a customs-cleared basis.