Japan’s surging electricity prices are a warning for Asian countries 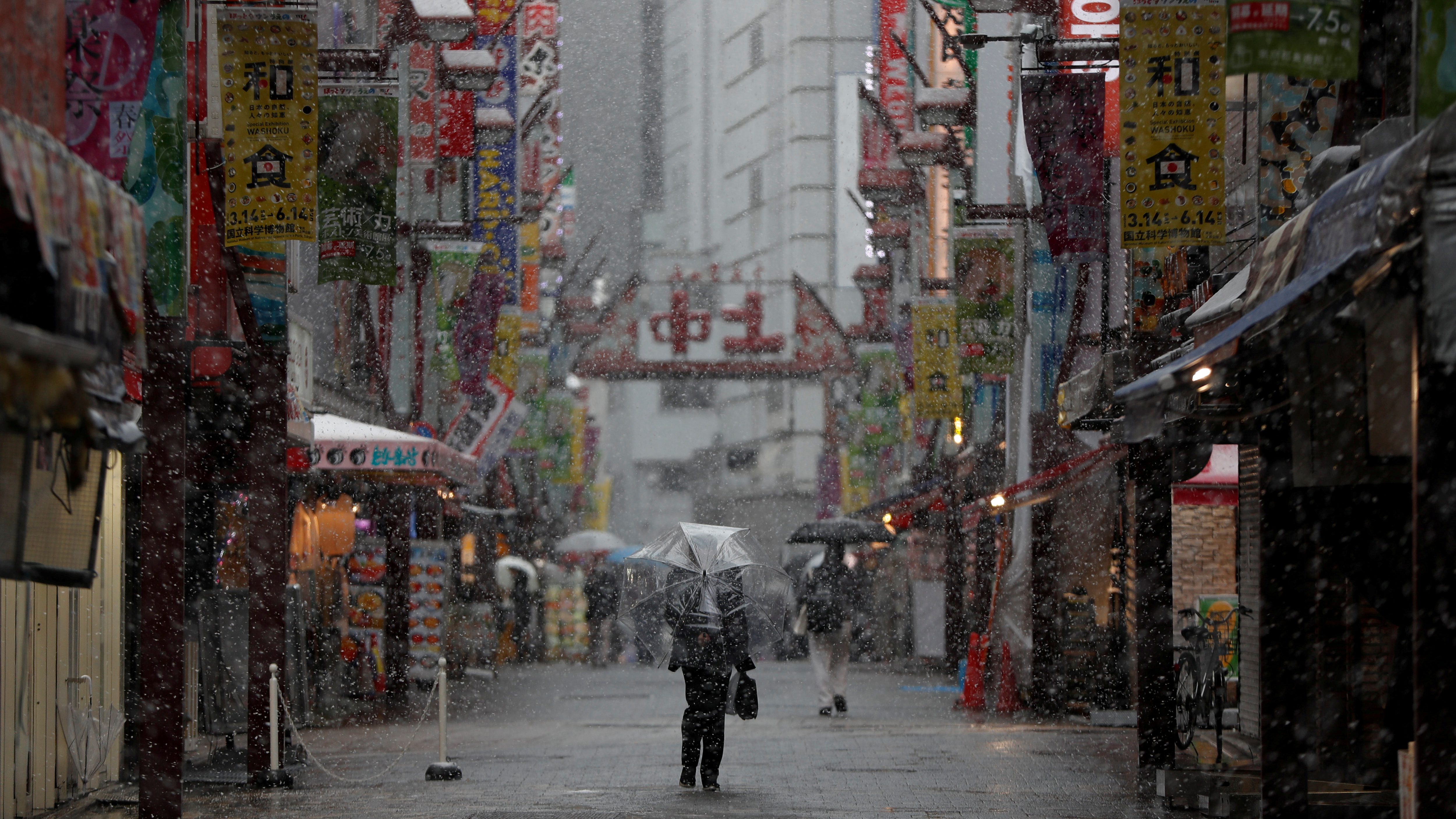 A cold snap in Japan revealed a flaw in how Asian countries plan to address climate change. | QUARTZ

Households across Japan are likely to get hit by massive electric bills this month, after the price of wholesale electricity there spiked from about 13 cents per kilowatt-hour in December to an unprecedented peak of more than $1 on Jan. 7. (The average Japanese household uses about 250 kWh per month. In the US, prices are typically 3-4 cents per kWh). By Jan. 18, the price had fallen back to its previous level.

What happened? The spike was partially a pandemic-related anomaly. But it was also an ominous sign of things to come for Asian countries working to curb their carbon footprints.

The immediate cause of the spike was bad weather. Japan was hit by an unseasonable cold spell, sending electricity demand in some regions to 10-year highs as homes and businesses cranked up electric heating systems. That in turn caused a sudden shortage of natural gas, which provides 20% of the country’s power and is entirely imported in liquid form (LNG) on ships. Despite the demand, several of Japan’s biggest utilities were forced to roll back power plant production, as the price of gas more than quadrupled from the beginning of December, hitting levels 1,000% higher than the record lows seen during pandemic lockdowns in May. A similar story played out in China and South Korea, turning the gas crunch into a regional issue. 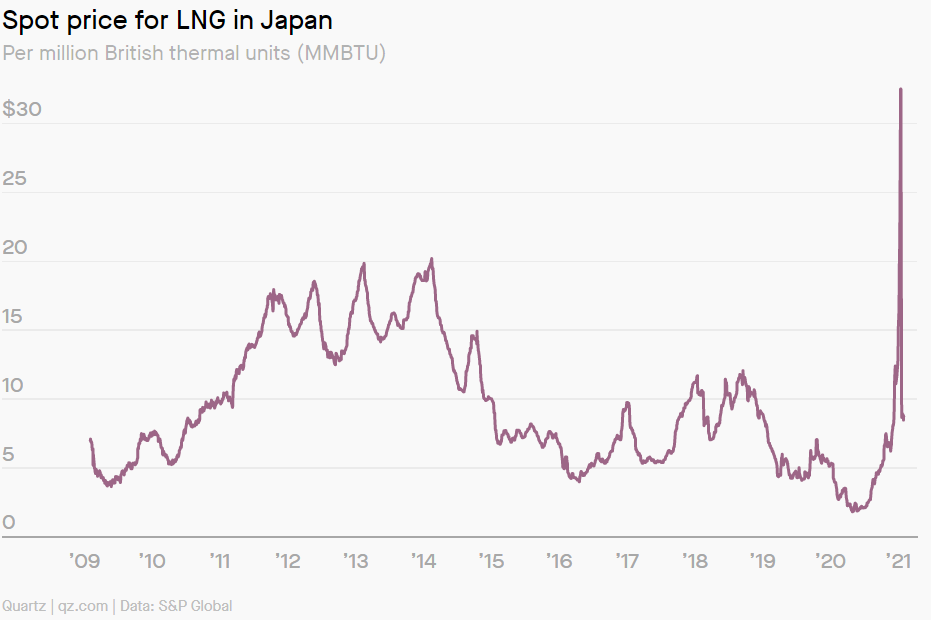 The timing couldn’t have been worse: LNG was already tight as export facilities in several of the countries that normally supply it to Asia—particularly Australia, Qatar, Malaysia, and Indonesia—had experienced an unusual cluster of concurring outages in the preceding months. The outages were caused by a mix of machinery problems, bad weather, reduced upstream gas production because of lower demand during the pandemic, and the opportunity afforded by the pandemic lull to perform routine maintenance. So when cold weather hit Japan, the LNG ships it needed to provide emergency heat just weren’t there.

LNG was available in the US. But as buyers in Asia made deals with suppliers in the Gulf of Mexico, traffic through the Panama Canal backed up; daily charter rates through the canal jumped from $30,000 to a record $230,000, according to the International Energy Agency.

The bottleneck has since eased, and prices for electricity, gas, and ships normalized as supply caught up and temperatures rose. But demand for LNG is growing across Asia, as countries there look to reduce pollution and carbon emissions from their world-leading reliance on coal. Lower-income countries like Vietnam and Bangladesh are also trying to increase their citizens’ overall access to reliable electricity.

“The big prize for the energy transition is how to get Asia off of coal,” said Nikos Tsafos, deputy director of the energy security and climate change program at the Center for Strategic and International Studies, a Washington think tank. “There’s this sense there that gas is cheap and will help with decarbonization. And when you see spikes like this, you really have to rethink how true that is.”

LNG is the object of the world’s last great fossil fuel gold rush. Gas generally pollutes less than coal, and in most places is still cheaper as a source of baseload electricity than renewables. But because it is produced at scale in relatively few countries (chiefly the US, Russia, and Qatar), to reach most global markets it must be liquified and transported by sea. Analysts expect global LNG demand to double by 2040.

Demand is already booming. The number of countries with LNG import terminals grew from nine in 2000 to 42 in 2020, according to IEA, with most of that growth in Asia. LNG has already contributed to a moderate shift off of coal in India, China, Japan, and South Korea. Japan’s main electric utility is now the world’s single biggest LNG importer.

But as more Asian economies put more of their eggs in the LNG basket, they become increasingly exposed to sudden wild price swings. Supply disruptions in LNG exporting countries appear likely to continue in the near future as the global economy recovers from the pandemic, said Bruce Robertson, an Australia-based LNG finance analyst with the Institute for Energy Economics and Financial Analysis. Utilities in lower-income countries could be forced to shut off services if gas becomes too expensive; during the recent spike, Bangladesh and Pakistan both canceled orders for LNG because of the cost.

“Those are price-sensitive markets,” Robertson said. “They can’t sell electricity at any price like utilities can in Japan.”

More significantly, a high price for LNG threatens to strand the major investments that many countries have made or plan to make in import terminals. Pakistan, Vietnam, and Bangladesh have combined $50 billion in proposed LNG assets that are at risk of cancellation because of high LNG prices, according to a Jan. 14 IEEFA report authored by Robertson. Those investments are a risky strategy for economic development and energy security given the volatility of the LNG market, Robertson said.

While LNG may be cleaner than coal, it still has a major carbon footprint, with emissions at every stage of the liquification and re-gasification process, on top of those from power plant operations and methane leaks. Multibillion-dollar investments in LNG infrastructure that are meant to last decades could lock in emissions that will be hard for Asian countries to shake in the long term.

Part of the solution, Tsafos said, is for the Asian LNG market to embrace more steady, long-term contracts rather than the on-demand purchases that are the norm today. Delivering gas by ship on demand, instead of by a fixed pipeline, allows buyers and sellers more flexibility in theory, but becomes a problem when too many buyers are clamoring for the same shipment. Asian countries also need a better network for managing the regional flow of LNG, and will have to continue investing in alternative clean energy systems, including renewables and grid-scale energy storage, he said.

“There’s no real point, if you’re aiming for decarbonization, to go for an expensive, volatile fuel like gas,” Robertson said. “You’re better off looking at alternatives, and that’s the conclusion a lot of these countries will come to.”