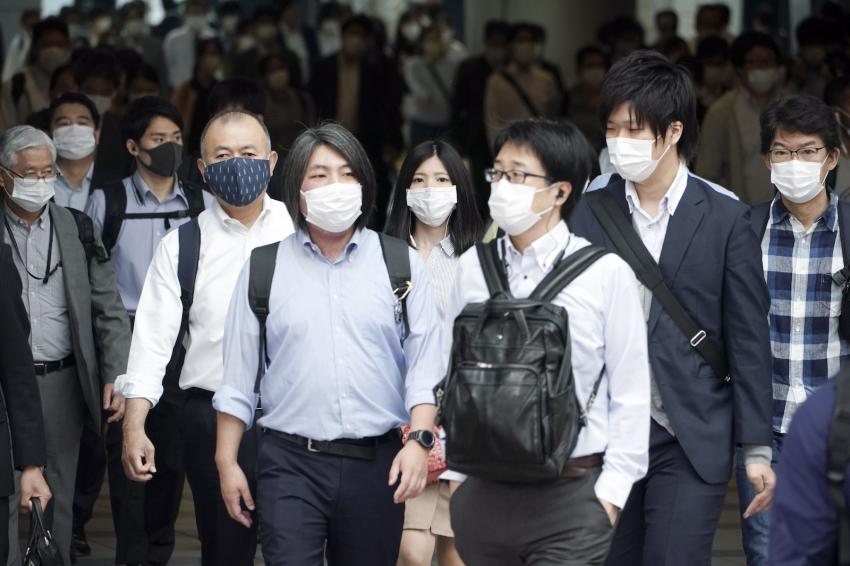 A station passageway is crowded with commuters during rush hour in Tokyo on Tuesday.

Major companies such as Hitachi Ltd and NEC Corp said Tuesday they will continue to push work-from-home arrangements even though the state of emergency over the new coronavirus pandemic was called off the previous day.

Hitachi said around 70 percent of its employees on average have been working from home to reduce the risk of infection and curb the spread of the virus after the state of emergency was declared in April, and it will continue promoting teleworking to ensure business continuity in case a second wave of infections occurs.

Hitachi said it will ask its employees to work from home in principle through the end of June, except for such cases as infrastructure inspections. It aims to have 50 percent of its employees engaged in telework on average as the epidemic subsides, Senior Vice President Hidenobu Nakahata told an online press conference.

Prime Minister Shinzo Abe on Monday lifted the state of emergency still in place for Tokyo and four other prefectures, having ended restrictions for other parts of the country earlier in the month.

NEC also said it will continue to ask employees to work from home, in principle to reduce the risk of infection.

If an employee needs to come to the office, the company said they must adhere to anti-infection measures such as avoiding busy commuting hours.

Kobe Steel Ltd will also for the time being continue telework where possible, with the aim of halving the number of commuters from the pre-coronavirus crisis level, while Fujitsu Ltd seeks to keep the ratio of office commuters at 25 percent or lower.

At Meiji Yasuda Life Insurance Co, which reopened its offices nationwide from Tuesday, its 30,000 salespeople will refrain from meeting customers in person and will visit their homes only when customers agree.

Sony Corp, meanwhile, said it will gradually ease from June 1 its telework requirement, a measure taken since late March, as it implements precautionary workplace measures such as social distancing.

For the first half of June, it will try to keep the ratio of commuters at 20 percent or so and raise that level to around 30 percent from the third week of June.

Employees who joined the company in April but were asked to stay home will also be allowed to come to the office in stages from June 1.