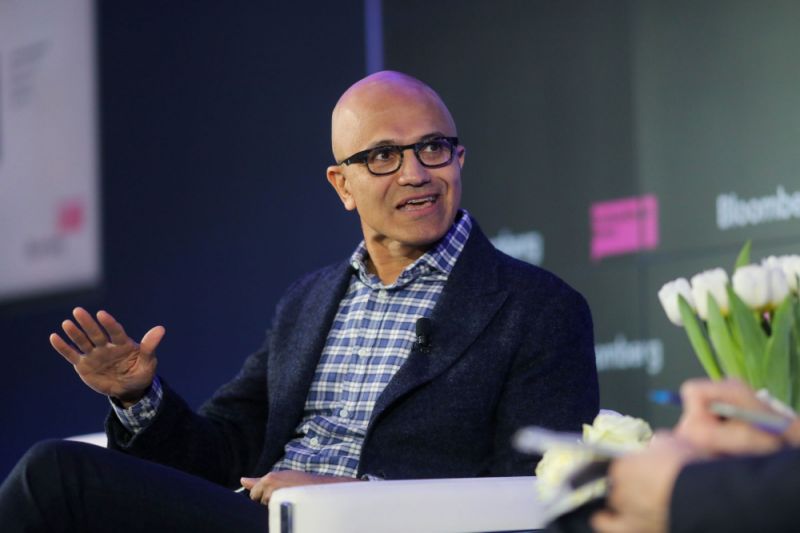 Microsoft Corp’s chief executive officer said he worries that mistrust between the U.S. and China will increase technology costs and hurt economic growth at a critical time.

Using the $470 billion semiconductor industry as an example of a sector that is already globally interconnected, Satya Nadella said the two countries will have to find ways to work together, rather than creating different supply chains for each country.

“All you are doing is increasing transaction costs for everybody if you completely separate,” Nadella said in an interview with Bloomberg News Editor-in-Chief John Micklethwait at Bloomberg’s The Year Ahead conference in Davos. That’s a concern as the executive said the world is on the cusp of a revolution around technology and artificial intelligence.

“If we take steps back in trust or increase transaction costs around technology, all we are doing is sacrificing global economic growth,” he said.

The Trump administration is considering steps to further limit the ability of U.S. companies to supply Huawei Technologies Co., China’s flagship tech company, in addition to pressuring countries around the world to avoid using its equipment for 5G mobile networks.

The agreement signed last week between the U.S. and China was “not sufficient,” said Nadella, but represented “progress” on the issue of intellectual property protections for U.S. technology companies working with China.

To enable different countries to use technology from outside their borders, Nadella suggested a system that relies on verification. For example, Microsoft has set up technology centers where various governments can inspect the Windows source code to satisfy themselves as to the security of the product.

“There has to be a way for any country to be able to trust, through verification, the technology that they are using as part of a their infrastructure,” he said. “Mechanisms like that have to be in place, and then build trade on top of it instead of thinking of trade and trust as the same thing.”

Nadella said he worries about the development of two separate internets, noting that to some degree they already exist “and they will get amplified in the future” with massive technology companies already in place in China.

The viewpoint clashes with Microsoft co-founder Bill Gates, who has been skeptical about the idea that ongoing U.S.-China trade tensions could ever lead to a bifurcated system of two internets.

China and the U.S. are the two leading AI superpowers, however the cooling political relations between them have slowed the international collaboration.

Even amid the tensions, countries should find ways to establish global norms around cybersecurity — such as agreements not to hack each other’s citizens — privacy and responsible AI, Nadella said. “Despite whatever trade dynamic causes people to separate, you would hope people would recognize we all benefit from more global norms, not less.“ Earlier this month, in a blog post about his goals for the year, Nadella said these areas are essential to earn and sustain people’s trust.

Nadella also warned that countries that fail to attract immigrants will lose out as the global tech industry continues to grow. The CEO has previously voiced concern about India’s Citizenship Amendment Act, which bans undocumented Muslim migrants from neighboring countries from seeking citizenship in India while allowing immigrants from other religions to do so, calling it “sad.”

“Every country is rethinking what is in their national interest,” he said. Governments need to “maintain that modicum of enlightenment and not think about it very narrowly,” Nadella said, adding that “people will only come when people know you’re an immigrant-friendly country.“

However, Nadella said he remained hopeful. “I’m an India optimist,” he said. “The fact that there is a 70-year history of nation building, I think it’s a very strong foundation. I grew up in that country. I’m proud of that heritage. I’m influenced by that experience.”

Microsoft has recently unveiled plans to invest $1 billion to back companies and organizations working on technologies to remove or reduce carbon from the atmosphere, saying efforts to merely emit less carbon aren’t enough to prevent catastrophic climate change.

“We will now have to make sure all our data center operations are first consuming renewable energy,” Nadella said.

Microsoft and Amazon.com Inc., along with other technology companies, have been criticized for supplying software and cloud services to large oil and gas companies like Chevron Corp. and BP Plc. BlackRock Inc.’s Larry Fink has been trailed to work and public engagements by protesters decrying the investment firm for inaction on global warming and other issues.

Activists have been pushing for companies to stop working with the largest producers of greenhouse gases. BlackRock has said it will cut exposure to thermal coal as the world’s largest asset manager moves to address climate change.

Nadella declined to comment on whether Microsoft would stop working with the major carbon producers. “The energy transition is going to include all of us,” he said.