One Neat Trick Turns WeWork Into a Winner 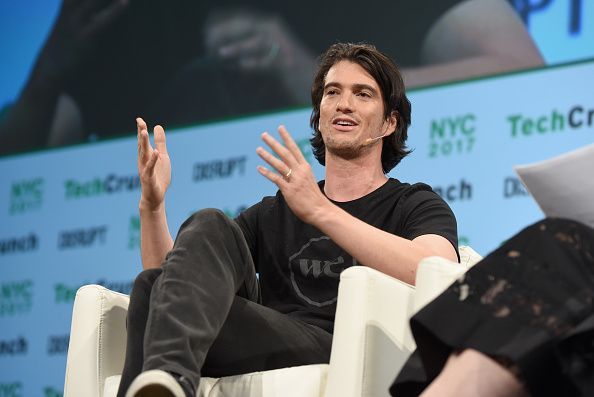 Masayoshi Son just pulled off a deal that gives him the best of both worlds. He’s found a way to keep a foot in WeWork without getting it stuck in the company’s quicksand of cash.

On Wednesday, SoftBank Group Corp.’s chairman announced that he’s increasing the company’s stake in WeWork to 80% ( from 29%). And yet, the parent isn’t welcoming the co-working space operator as a son; rather, it would be more like a nephew. This is the kind of accounting gymnastics, and hair-splitting, Son is becoming famous for.

Here’s what SoftBank said in a statement Wednesday announcing the $9.5 billion bailout:

“Since SoftBank will not hold a majority of voting rights at any general stockholder meeting or board of directors (“Board”) meeting and does not control the Company, WeWork will not be a subsidiary of SoftBank. WeWork will be an associate of SoftBank.”

As part of the package, SoftBank’s Chief Operating Officer Marcelo Claure will become executive chairman of WeWork’s board. The board will also receive voting control over founder Adam Neumann’s shares. That said, SoftBank has decided to classify WeWork as an associate, not a subsidiary, arguing it doesn’t have the majority of the company’s board of directors. To accountants, this means WeWork is being folded into SoftBank using the equity method.

Had SoftBank taken control of The We Co., WeWork’s official name, then it would be required under accounting rules to consolidate the company into the Japanese company’s financial statements, effectively bringing that dumpster fire into its own living room. All that WeWork debt — $22 billion at the end of June, as well as future loans needed to fulfill the $47 billion lease payments in coming years — would be added to the $137 billion of liabilities already on junk-rated SoftBank’s balance sheet.

Meanwhile, by elevating WeWork from a passive investment to an “associate,” SoftBank no longer needs to deal with fair-value accounting (the true mark-to-market number for WeWork) every time the co-working startup conducts a new funding round. SoftBank thus gets to benefit form the gentlest of accounting treatments: WeWork’s debt stays at arm’s length, and all SoftBank needs to include on its balance sheet are WeWork’s net assets. Believe it or not, that figure is still positive.

Sure, SoftBank would need to book its 80% portion of the startup’s net losses, but watch Son turn water into wine.

China’s e-commerce giant Alibaba Group Holding Ltd., which is also treated as an “associate” on Son’s books, is highly profitable and can easily make up for WeWork’s operating losses. Plus the pain of those losses is offset by reduced taxable income.