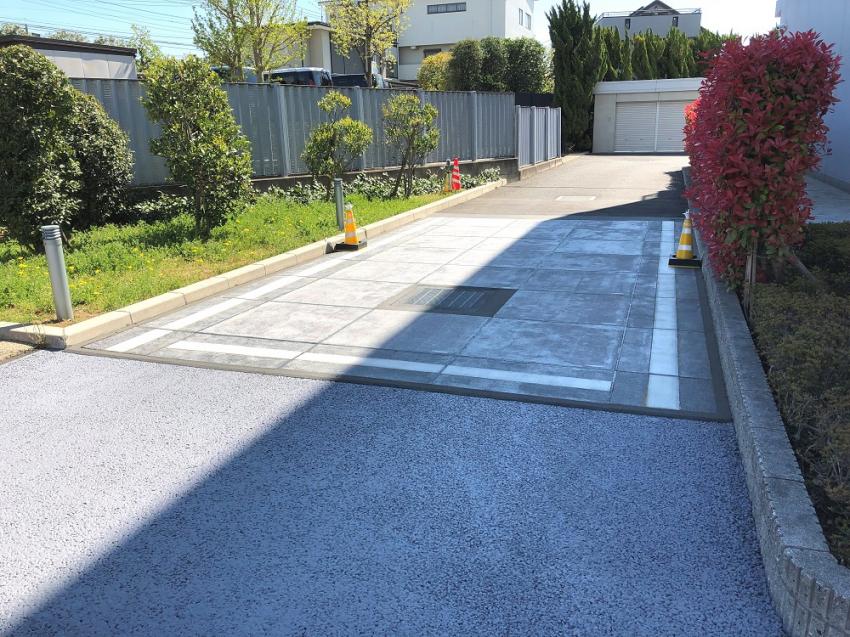 The module was installed on the premises of Nippo General Technology Center in Saitama City.

They constructed the power-generating pavement system on a trial basis on the premises of Nippo General Technology Center which checked the durability and power-generation efficiency of the system.

According to Nippo, this is the first time that a pavement having a solar power generation (PV) function has been developed in Japan. The company aims to commercialize the pavement system by 2022.

Nippo and Mirai-Labo developed a PV module consisting of film-like solar cells, wiring and transparent plastic plate that protects the surface. It is installed by (1) applying resin mortar (as adhesive) to an existing asphalt pavement to control irregularities and (2) attaching the PV module on it.

Electricity generated with the system is transferred to a dedicated power storage system, and it can be sent to street lamps around the pavement. The power storage system is equipped with multiple compact, detachable batteries. At the time of disaster, the batteries can be carried to shelters and medical facilities and used as emergency power sources.

Nippo had been engaged in the development of the pavement that generates electricity by using sunlight since 2017.

“We considered whether it is possible to add a new function, namely a power source, to a road that had been prioritizing the realization of space in which people and vehicles can safely move,” the company said.

Nippo focused on PV pavements that were in the stage of verification in France, the Netherlands, etc. And they started the development by using materials that can be procured in Japan.

Durability was the problem of the pavement system. General PV modules to be installed on roofs, etc often use solar cells made by embedding, for example, crystal-based power-generating devices in reinforced glass plates.

While such solar cells have a high power generation efficiency, they are vulnerable to deformation such as deflection. So, if they are introduced to pavements to which heavy loads are applied, they can be broken soon.

On the other hand, the film-like solar cell developed by Mirai-Labo is flexible enough to be bent by human hands. It is combined with a high-strength plastic plate to realize a structure resistant to deflection.

Its durability was confirmed in a test with a wheel load of 5 tons on the assumption that a large-size vehicle runs on the pavement. During the test, Nippo confirmed that the power generation function was not affected by the load.

Furthermore, the company found that the irregularities on the surface makes it easier to receive diagonal sunlight, improving power generation efficiency.