Salaries in Asia Pacific are forecast to grow at a greater rate than any other part of the world in 2021, in a signal that employers believe the region is emerging from the worst of the pandemic.

Asia Pacific pay packets are expected to rise by an average of 4.3% next year, up from 3.2% in 2020, even as global wages falter, according to a new salary report released Thursday by consultancy firm ECA International.

After accounting for inflation, that translates to average regional real wage growth of 1.7% — well ahead of the global standard of 0.5% despite comparable average inflation rates.

Indonesia leads the charge for 2021 salary increases in a top 10 dominated by eight Asia Pacific countries.

The Southeast Asian nation is forecast to see real wage growth of 3.8% in 2021, up from 2.6% in 2020, as employers walk back wage freezes and inflation continues to fall.

Second-place Israel’s real wage growth ranks somewhat behind at 2.8%, just slightly ahead of joint third-place nations Singapore and Thailand’s 2.7%. Colombia, also at 2.7%, is the only other non-Asia Pacific nation to make the top 10.

“Few countries are expected to see a significant rise in the level of real salary increases in 2021, but there are exceptions to this within the Asia Pacific region,” the report noted. 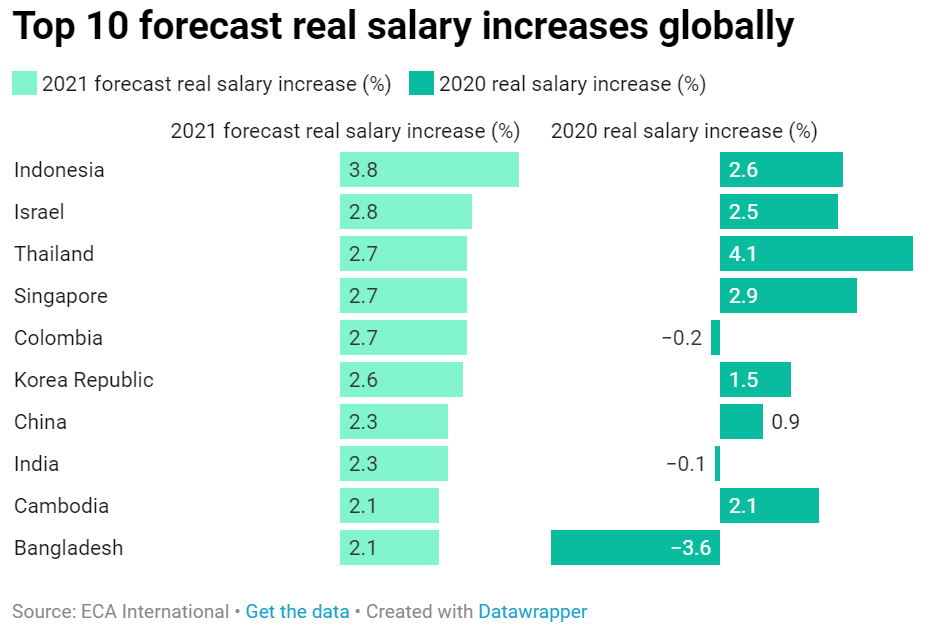 Conducted annually, ECA’s Salary Trends Survey is based on an August to September survey of 370 multinational employers across 68 countries and a range of industries.

Lee Quane, ECA International’s regional director for Asia, attributed this year’s gains to a “sustained increase in productivity in many Asian nations” despite the coronavirus crisis.

By and large, Asia Pacific has avoided the sweeping and continued lockdowns endured by other parts of the world in the latter half of this year, paving the way for faster economic recovery. As such, just 22% of surveyed employers in the region expect to implement salary freezes in 2021, compared to 36% this year.

Other parts of the world still struggling to contain the virus may face a prolonged economic fallout and resultant hit to wages, however, said Quane.

“Although many Asia Pacific countries are already seeing signs of recovery, companies based in other parts of the world such as the United States and Middle Eastern countries are approaching salary rises more conservatively,” he noted.

A frontrunner in the region, Singapore is forecast to see real wage growth of 2.7%, even as a higher-than-usual 0.3% inflation rate pinches.

China, too, is expected to see a notable salary increase of 2.3% after inflation, which Quane attributed to the country’s perceived resilience to the virus.

Real salaries for Hong Kong residents will be amongst the lowest in the region.
Lee Quane
REGIONAL DIRECTOR FOR ASIA, ECA INTERNATIONAL

“China’s economy seems to have weathered the impact of the Covid-19 pandemic better than many other locations in the region, and this is reflected in the extent to which salaries are forecast to grow again in 2021,” he said.

Hong Kong, meanwhile, is something of an outlier in the region. The global economic hub faced a dual hit to wages in 2020 amid the pandemic and ongoing socio-political tensions. The city’s wages are expected to rebound 3% in 2021, but with inflation estimated at 2.4% that will translate to real wage growth of just 0.6% — well below the regional average.

“Real salaries for Hong Kong residents will be amongst the lowest in the region,” noted Quane. “This compares unfavourably with expected rates of real salary increases across other parts of Asia Pacific, and may hinder the extent to which the Hong Kong economy may recover from the current recession.”