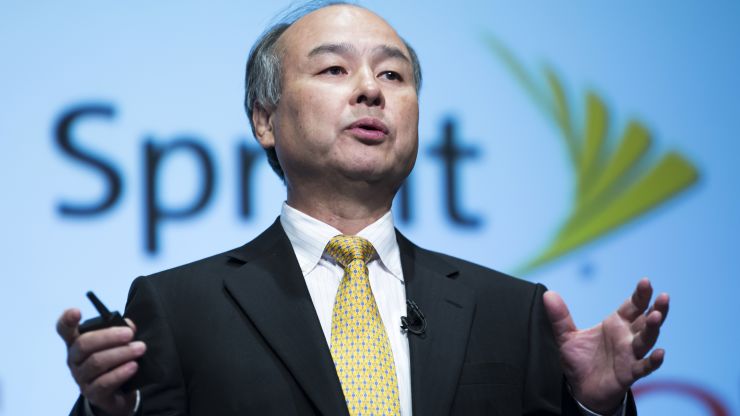 SoftBank Group Corp. Chairman and Chief Executive Officer Masayoshi Son speaks during a press conference on May 10, 2017 in Tokyo, Japan.

SoftBank has a reclamation project on its hands. This week, CEO Masayoshi Son swooped in to take 80% control of WeWork in what amounted to a bailout of the office-sharing company after the public markets rejected it.

Six years ago, SoftBank bought a 72% stake in Sprint, increasing it to more than 80% over time, in an effort to become a major player in U.S. wireless.

Sprint and WeWork have very little in common as businesses. But the same SoftBank execs — Son, Marcelo Claure and Ron Fisher — are calling the shots and trying to steer a floundering company to sustained profitability.

By the time SoftBank took its first $4.4 billion stake in WeWork, the firm had already established itself as a big money player in Silicon Valley. The environment was very different in October 2012, when SoftBank agreed to take 70% control of Sprint for $20.1 billion (it moved up to 72% for $21.6 billion at the close of the deal). Son said at the time that he could use SoftBank’s experience in the wireless industry in Japan to create the fastest network in the U.S.

SoftBank successfully engineered a sale of Sprint for $6.62 per share to T-Mobile in 2018. (State attorneys general are in court attempting to quash the deal on grounds that it will unacceptably decrease competition.) But SoftBank acquired its majority stake in Sprint for $7.65 a share in 2013. When SoftBank bought Sprint, it was the third-largest U.S. wireless carrier by subscribers. When SoftBank sold, Sprint was a distant fourth behind Verizon, AT&T and T-Mobile.

Sprint even acknowledged in April it didn’t have a sustainable path forward in a filing to the Federal Communications Commission, asking for the regulator to approve its sale.

“Sprint is in a very difficult situation that is only getting worse,” the company said in the letter. “Sprint is losing customers — which then reduces revenues and cash flow — further limiting its ability to invest in its network and service its debt. Simply put, Sprint is not on a sustainable competitive path.”

Adding up its positions in Sprint and WeWork, SoftBank has about $40 billion at stake, putting the firm’s trio of leaders at the center of two highly consequential corporate ordeals that could make or break Son’s image as a titan of American business.

There’s little reason to believe Son, Claure and Fisher can use their Sprint playbook to give WeWork investors and employees confidence in their future success, said Craig Moffett, a telecommunications analyst at MoffettNathanson.

“Sprint has been an unmitigated disaster,” said Moffett. “Sprint has contracted steadily since SoftBank bought it, even in a growing wireless market. Their only hope for an exit is to pray their deal to sell it to T-Mobile is approved.”

Claure, 48, served as Son’s handpicked CEO of Sprint from 2014 until late last year and has since held the role of chairman. He and Son, 62, are so close that after SoftBank took control of Sprint, they bought houses right by each other, near the company’s headquarters outside of Kansas City.

Claure took his initial stab at rallying the WeWork troops this week at his first all-hands meeting in New York. After sending around an email to staff acknowledging that layoffs are coming, Claure talked about his leadership experience, highlighting his time at Sprint, a 120-year-old company with tens of thousands of employees that he helped modernize with a WeWork-like office model.

“When you walk through the corridors, those tall cubicles, people didn’t talk to each other, people didn’t communicate,” Claure said, according to a leaked recording of the meeting that was obtained by Recode and confirmed by CNBC. “When we brought them to an open and collaborative space, the magic started to happen.”

Claure’s plan at Sprint involved gutting the second floor of one of the company’s buildings at its sprawling headquarters in Overland Park, Kansas, to look more like a modern office building with bullpen type workstations instead of offices and big cubes. Free food and snacks appeared along with cases of Claure’s preferred beverage, Fiji Water, and beer for Friday happy hour, according to former employees. Sprint eventually turned to WeWork for a more thorough renovation at one of its main buildings.

Chaos at Sprint
Son and Claure are both entrepreneurs themselves and could relate to the dreamy idealism of Neumann, whose stated mission at WeWork was to “elevate the world’s consciousness.” Corporate governance and financial discipline are not their strengths, according to people who have worked with them.

Fisher is Son’s business guy, who’s been at the founder’s side for 24 years and started SoftBank Capital, the investment wing of the company. Fisher joined the WeWork board at the time of the firm’s initial investment in 2017. He’s a respected voice but a much less boisterous presence than Son or Claure, the people said.

A SoftBank spokesperson didn’t make the executives available for an interview and declined to provide a comment for this story.

Former executives who worked at Sprint during Claure’s transition say his fast-moving, knock-the-walls-down approach created a culture clash and left employees unclear about the company’s direction. The people asked not to be named so they could speak candidly about their experiences.

As chairman, Son kept a firm grip on Sprint even after Claure succeeded Dan Hesse as CEO a year into the deal. Every month, about 50 to 60 managers, including executives from Sprint’s headquarters and SoftBank’s Tokyo operations, would meet in San Carlos, California, where Son was setting up a Silicon Valley beachhead. There, depending on the trajectory of the business, Son would either fire up the team with messages of support or tell them they weren’t delivering, according to people who attended.

One former executive said that while the management events were supposed to foster collaboration between the leaders from SoftBank and Sprint, there was a palpable disdain for Sprint’s more conservative culture.

It was also clear at the gatherings that Son was running the show and there was no room to contradict him or question his decisions, attendees said. The same was true at board meetings, where Son was clearly in charge, whether he was in Kansas or Japan, according to people who were in the room.

Son hasn’t said if he’ll take a formal role at WeWork. In announcing the new financing package on Tuesday, WeWork said the board would expand, and a person familiar with the matter told CNBC that SoftBank will get more seats. Artie Minson and Sebastian Gunningham, who were two of Neumann’s top deputies, are now co-CEOs and will receive severance in the millions of dollars if they leave, Bloomberg reported.

The SoftBank funding includes $5 billion of fresh capital and up to $3 billion in a tender offer for existing shareholders as well as speeding up an existing $1.5 billion financing commitment, bringing SoftBank’s total investment to about $18.5 billion. That’s $6.5 billion more than WeWork’s post-money valuation.

Co-founder Adam Neumann is being paid up to $1.7 billion to leave the board, just over two months after he was poised to take the company public in one of the most anticipated IPOs of the year. Son had been such an enthusiastic supporter of Neumann that he put up few guardrails as the company’s dominant investor, allowing Neumann to invite thousands of employees to an annual summer camp outside of London while he was also flying around the globe on a $60 million private jet.

“It is really a tail of pretty failed governance, and almost of the highest order short of something fraudulent,” venture capitalist Chamath Palihapitiya said in an interview on CNBC last month. “That’s really quite a shame and something that we really have to address as an industry if we’re going to have credibility with the public markets.”

Desperate for a deal

SoftBank’s management of Sprint has been anything but smooth. From the beginning, Son wanted to buy T-Mobile, too, but dropped the plan in 2014, when it became clear that antitrust regulators would block it. The company then tried to aggressively compete for wireless customers, slashing prices to lure customers from AT&T and Verizon.

But Sprint’s annual revenue has shrunk since SoftBank took over, from $35.3 billion in 2012 to $33.6 billion in the latest fiscal year. Recently, subscriber numbers have been dropping, and the company recorded a $1.9 billion loss last year. Still, Claure made over $40 million in compensation from 2015 through 2017, primarily because of stock awards that resulted from keeping the shares above $8 per share, which was only marginally higher than the price SoftBank paid in 2013.

The future of the business was unclear until Donald Trump was elected in 2016, which significantly helped the prospects for a merger with T-Mobile (perhaps aided by Son’s promise to invest $50 billion in the U.S.). Sprint’s position in the market had deteriorated so much that T-Mobile was now the stronger company, meaning Sprint’s only way of consummating a deal was to be the seller.

“The argument to regulators has essentially been that Sprint is a failing firm,” said Walter Piecyk, a telecommunications, media and tech analyst at LightShed Partners.

While Sprint has apparently tried to tamp down its own growth prospects to get regulators more on board with a sale, Piecyk was skeptical this was the company’s grand plan.

“I’m not sure you purposefully fail for five years,” he said.

Even today, SoftBank has to hope that states either drop their opposition to the deal or that Sprint and T-Mobile are victorious in the courts because Sprint has little hope as a standalone entity. A trial has been set for Dec. 9.

With or without a deal, the Sprint playbook doesn’t provide much appeal to those counting on SoftBank to rescue WeWork, which is saddled with $17.9 billion in long-term lease obligations and lost $900 million in the first half of the year. And unlike with Sprint, there are no natural acquirers of WeWork — certainly not at a price that would put SoftBank’s $18.5 billion investment above water.