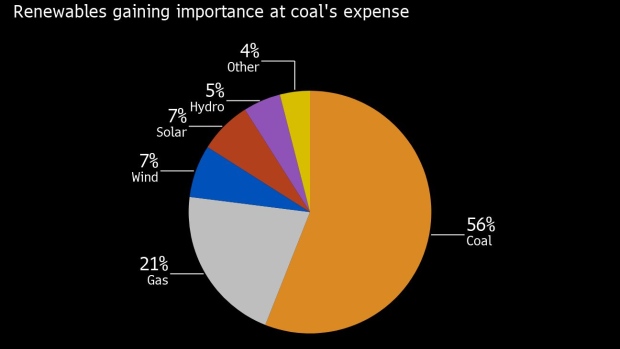 Stacker-reclaimers operate next to stockpiles of coal at the Newcastle Coal Terminal in this aerial photograph taken in Newcastle, Australia. , Photographer: Brendon Thorne/Bloomberg

Even the world’s top coal exporter is struggling to make money from burning the fuel.

Australia’s coal power plants, which make up more than half of the nation’s generation mix, are facing increased pressure as rooftop solar hollows out daytime demand. That could mean early closures among the country’s aging fleet, giving energy planners the tricky task of ensuring energy security while replacing the steady, predictable flow of power with more variable renewable generation.

“We’ve got a problem with coal closures,” Kerry Schott, chair of the Energy Security Board, told a virtual clean energy summit on Thursday. ‘We’ve got plants that are becoming uneconomic and some have got very tight margins at the moment.”

A surge in new wind and solar capacity is driving wholesale electricity prices as low as A$40 ($29) a megawatt-hour in some parts of the network — in many cases lower than it costs the plant to buy its coal, Schott said. Reduced demand because of coronavirus restrictions has also damped prices. While that’s a good thing for the consumer, it’s vital to ensure that any capacity lost due to coal retirements is replaced in a way that also safeguards network security and reliability, she said.

Australians love of rooftop solar is also under-cutting coal plants. Almost one in four Australian households has panels, and there’s still scope for solar capacity to jump by 500% by 2050, according to BloombergNEF.

Australia’s coal fleet is mostly owned by the country’s three big power companies: AGL Energy Ltd., Origin Energy Ltd. and the CLP Holdings-owned EnergyAustralia. AGL’s Liddell facility will kick off a raft of retirements over the next decade with a phased shutdown from 2022.

For many, those closures will be necessary if the world is to meet its long-term targets for curbing the rise in global temperatures.

“As it stands now, if they continue to operate as they run then it is impossible. We can forget reaching hard climate targets,” International Energy Agency Executive Director Fatih Birol told the same conference on Thursday.

(Michael Bloomberg, the founder and majority owner of Bloomberg LP, the parent company of Bloomberg News, has committed $500 million to launch Beyond Carbon, a campaign aimed at closing the remaining coal-powered plants in the U.S. by 2030 and slowing the construction of new gas plants.)