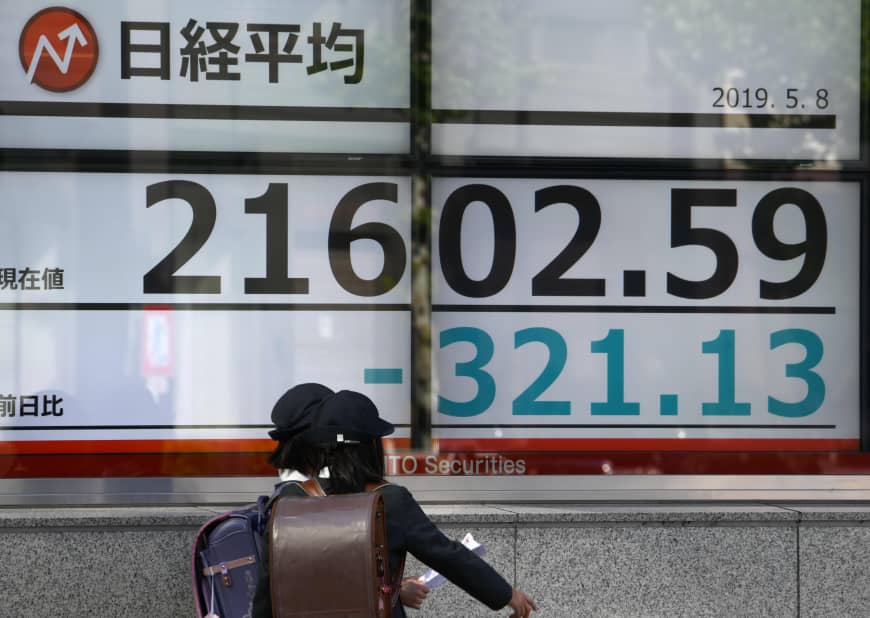 Elementary schoolchildren walk past an electronics stock indicator in the window of a securities firm in Tokyo displaying the closing numbers for the Tokyo Stock Exchange on Wednesday. | AFP-JIJI
Stocks sank deeper across the board on the Tokyo Stock Exchange Wednesday, as heightened trade tensions between the United States and China continued to chill investor sentiment.

Both Nikkei and TOPIX stayed deep in negative territory for the rest of the session, also pressured by the yen’s strengthening against the dollar, brokers said.

The United States and China are expected to resume their ministerial-level trade talks in Washington on Thursday, the day before the proposed tariff hike.

“A risk-off mood will likely prevail at least until Friday” to see what will happen in the trade negotiations, said Hiroaki Kuramochi, chief market analyst at Saxo Bank Securities Ltd.

Depending on developments related to the U.S.-China trade dispute, the Nikkei may fall as low as its 75-day moving average of around 21,350 in the near term, an official at a major securities firm said. Read More